Technology’s influence can be felt in every aspect of our lives, but it is especially apparent in the way we communicate with one another. On a basic level, typewriters have become laptops, landlines have become cell phones, and letters have become emails. A quick question can be answered with an even faster text. If a long-distance phone call won’t suffice, then FaceTime is always an option. But how do all these changes in the way we communicate affect our children? 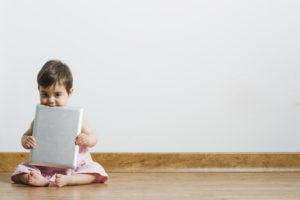 In an ideal world, the impact of technology on children would be completely positive. However, a recent UCLA psychology study found that children’s social skills may be declining as they spend more time in front of a screen and less time interacting with their peers. “The displacement of in-person social interaction by screen interaction seems to be reducing social skills,” said Patricia Greenfield, senior author of the study.

For most parents, the combination of technology and young children has been an absolute blessing. An argument between siblings is resolved by a favorite TV show. A fussy child in a restaurant is quieted by a familiar iPad. But could these simple, life-saving solutions be causing more harm than good? According to the American Academy of Pediatrics, excessive media use can lead to attention problems, struggles in school, sleep and eating disorders, and obesity. For these reasons, the AAP recommends that parents limit the amount of technology affecting children. Young children and teenagers should be limited to one or two hours of media per day, while infants and children under the age of two should avoid media entirely.

Unfortunately, most parents probably don’t realize how much time technology and young children spend together. They may remember the short TV shows or educational iPad apps, but there is often a bit of a cognitive disconnect when it comes to the overall daily total. In a case study conducted by The Learning Habit, most parents reported that their child used between one and two hours of media per day. However, when all devices, including TV’s, iPads, game consoles, cell phones, and computers, were taken into account, the total was much closer to six hours per day. That’s 42 hours per week!

With proper parental supervision, technology can be used for entertainment, communication, and education. It can allow children to master their ABC’s, learn a new language, and expand their horizons. Just remember that the impact of technology on children is very real and shouldn’t be ignored.